I give you three comic series that I loved as a kid. There was this comic collection that came out weekly, printed in black and white. Each issue featured several pages of each of several recurring comics. Not all stories were advanced every week. The collection came out on Tuesdays and I would buy it at a news stand across the street from my apartment building (I grew up in a big city, on a busy street) on my way back from school and read it immediately.  My dad would read it in the evening or the day after.

Rip Kirby, a gentleman detective. With his delightful butler Desmond and long-time girlfriend Honey Dorian, Rip’s world was set in the 50’s and he smoked a pipe and solved crimes. I am a kid of the 70’s, so these comics were old when I read them, but I remember really admiring the art. Here are some samples by Alex Raymond, the original artist:

In the 60’s, the comic was taken over by John Prentice. Here are the last to strips from Rip Kirby, drawn by Prentice.

Modesty Blaise and her trusted (platonic) friend, Willie Garvin. Modesty is skilled in close combat and could be loosely classified as a spy. There were several different artists who drew Modesty Blaise and I remember  greatly preferring Jim Holdaway’s artwork. Modesty spent a lot of time being immodest and generally kicked butt. I may have had a comic-book crush on Willie. Corto Maltese by Hugo Pratt. I don’t think I understood half of the comic when I was a kid, but was oddly mesmerized by the artwork. It was minimalist and felt almost unstructured, for lack of a better word; I can’t say I even liked it, but I still could not take my eyes off. Look how he uses those bold, black strokes. Corto was an adventurer; I remember Rasputin played a big role in the story. But, more than anything, I remember these vast panels of Corto just smoking and looking out of windows and balconies, and over bodies of water. 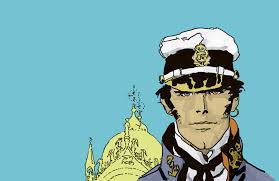