I hate it that Saturday is such a slow day on the web, so here’s my contribution to the fight against the contentless slump: 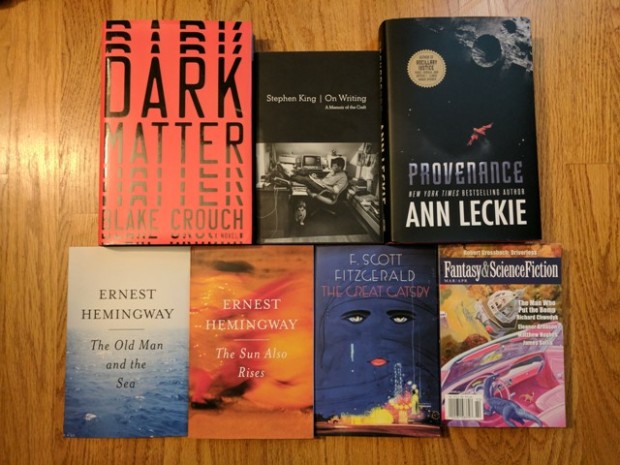 I read Blake Crouch’s Dark Matter a few months ago, but never posted about it. It’s a sci-fi thriller and it’s really good. The title is stupid, has nothing to do with the book, and reeks of editorial overreach (I bet they thought “dark matter” would always be cool; well, it’s not), but the book itself is an excellent example of its genre. The writing is fluid and disciplined, the plot is superb, and the main character (along with a few secondary ones) has a depth that you don’t necessarily expect from the genre. Highly recommended.

Then there’s an all-time fave, Stephen King’s On Writing. The first time I read it, it was a borrowed copy. I recently bought my own, and have been thumbing through it. As I said before, it’s part memoir, part writing manual, yet it reads like a thriller. I could not put it down — again!

The one I look forward to reading is Ann Leckie’s Provenance. I have no idea what it’s about, but I loved her Ancillary Justice, which received just about every sci-fi award there is. Ann Leckie, along with Becky Chambers (The Long Way to a Small, Angry Planet) and Catherine Webb (The First Fifteen Lives of Harry August), embodies the style of writing I really enjoy: clear, uncluttered, with a gentle touch — good plot, plenty of depth and emotion in characters, while avoiding the following two issues that often bother me. 1) These authors can convey emotion without getting all sentimental (blech sentimentality; here’s a flash that presents emotion without the sappy gooeyness). 2) They can tell a story without imposing themselves personally on us; they resist the temptation to constantly remind us how clever and/or erudite they are, which I feel so many others fail at because they take themselves far too seriously (I remember a particularly obnoxious description of the main character’s perm in The Interestings as her “poodly, dandeliony” head).

I read The Old Man and the Sea and For Whom the Bell Tolls by Hemingway in my native tongue in my youth, but I figured I should read Hemingway in English, as an example of acclaimed sparse prose, so I bought The Old Man along with The Sun Also Rises. On the other hand, I’d never read Fitzgerald’s The Great Gatsby, and I figured I should do it as a matter of self-education in English. [N.B. I will say this explicitly, just in case it’s not self-evident: many of the famous American novels are not equally famous outside of the US. This is particularly true when it comes to the classics that are on the high-school reading lists in the US, such as To Kill the Mockingbird or Catcher in the Rye, both of which I did read in English in adulthood, or The Great Gatsby. In my experience, the US high-school reading lists are heavy on domestic fare and light on international authors, which is not the standard elsewhere. I grew up in a small country and we read broadly; neither domestic nor American authors featured prominently in the curriculum.]

A book that I ordered but that didn’t make it in time to be photographed is The Unconsoled by Kazuo Ishiguro (he just received the Nobel). I’d never read anything by him, but Clarissa says this is the best novel by him, and I trust her completely when it comes to literature.

Finally, I received a sample copy of Fantasy & Science Fiction, one of the oldest and most reputable sci-fi magazines, which still exists only in print. I actually paid for one sample copy but received two, in separate shipments and presumably by mistake, so now I have one that I might give out as a reward for some future sci-fi-based short-story contest or something similar.

What are you guys reading these days?