I am on sabbatical this year and it is glorious. I have time to exercise every day, so I’m walking, running, and back to my biggest love — kickboxing! I’m feeling human again, and not just human, but like a grounded, rarely salty, and — dare I say? — moderately energetic human.

I’m not teaching or doing university service, but all the research is still here, as is all the other professional service, being that I’m now apparently a scientific elder states(wo)man (associate editorship of journals; reviews of papers — how am I the tie-breaker referee all the time these days?; reviews of so, soooo many proposals; membership on boards overseeing all sorts of scientific activities).

I was really busy last year, with teaching overload and really labor-intensive department service, but I think I’d gotten reasonably well rested by the end of the summer, and I am really, really grateful that I don’t have to jump back into teaching again.  Instead, this year will (at least in theory) be the year of getting the backlog of publications out to journals and bringing my largely newbie grad students up to speed. Also submitting more grant applications.

This doesn’t sound particularly restful or rejuvenating, does it?

I should be using the sabbatical to do even more science, newer and more exciting science, but it’s hard to be all gung-ho about it when a lot of energy keeps being spent on maintaining continuous funding and getting papers out while training students, all of which are in line with incremental work and orthogonal to making big, rejuvenating leaps.

Anyway, I do have some trips planned in the spring, and some talks scheduled with new communities, where I will hopefully hear some interesting talks and get some cool ideas. Other than that, I think I want to simply spend more time on my creative writing, which has been going well, thanks for asking. 🙂 I am contemplating between, on the one hand, writing a novel — which everyone says I should do, and this free time is a unique opportunity I will not have again for the next 7 years, but I’m feeling meh about it, and even though there are 3-4 stories I wrote that were really well received and could kick off a novel, I don’t crave to spend 80-100k words with any of those characters — and, on the other hand, simply writing more short fiction, poetry (yes, there’s poetry now, too, and not all of it is garbage, at least I don’t think it is), and — newsflash! — screenplays. The latter is what I’ve been gravitating toward, even though, as an endeavor with any kind of payoff, it’s probably far more futile than writing a novel. 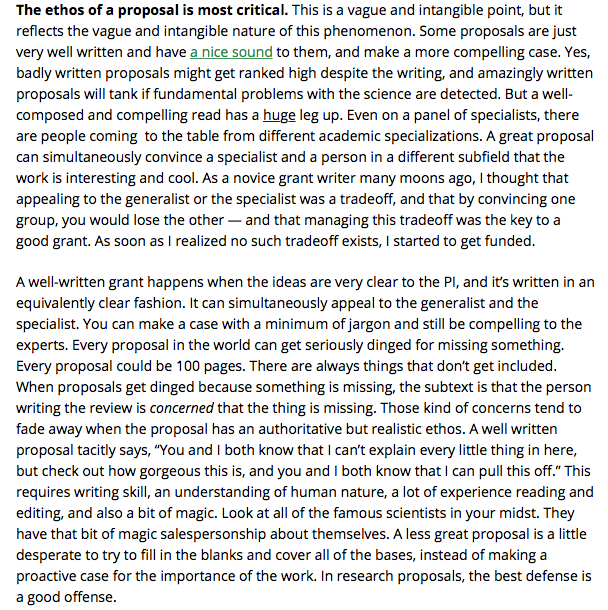 Anyhow, a bit more on the acceptability of hobbies for STEMcademics. Anything physical is obviously OK, lauded even (e.g., running, rock climbing, whitewater rafting), as are music and painting, although I don’t know many practicing painters or musicians among scientists, even though I hear math and music often go together, so often that my tin ear must mean that I am deluded about my ability to do advanced math. But yes, there are a lot of runners and gym rats among STEM folks. Artisanal baking or cooking are OK, too.

Some other hobbies appear to be shameful. Nobody ever confesses to gaming or to watching movies or TV shows. A number of my colleagues lament how they wish they had more time for movies or TV, thereby simultaneously boasting how virtuously busy they are (protestant work ethic?) and signaling how lowly of a pastime they consider video entertainment to be. Then there are the hobbies that involve parts of the brain that should be used in cranking out papers, such as blogging or writing. One should never admit to engaging in these hobbies, lest one wants to be told they have too much time on their hands and should spend it writing papers instead.

I wonder how people would react to saying you don’t just occasionally play an instrument, you compose music and/or are seriously involved with a band or an orchestra. Or that you don’t just cook for your family, you’re actually a part-time chef at a restaurant and/or have written cookbooks. Or that you aren’t just a gamer, that you develop and sell games (unless you’re in CS and specialize in computer graphics or animation). Or that you’re a lifestyle or makeup vlogger. Or that you paint or sculpt so avidly that you’ve exhibited your art and/or made some serious coin off the hobby.

While running marathons seems to be universally lauded, because physical exercise is considered a good destressor and generally beneficial to your performance on the job, it seems to me that being too serious about nearly any other pursuit might raise eyebrows of colleagues; they think it siphons creativity from where it is supposed to lie: your job. As if creativity is a well you can only deplete, as if it’s not replenished (at least for some of us) by a large variety of creative pursuits.

This attitude has even been coded in the university effort reporting protocols. You don’t report the fraction of a 40-hour workweek you spend on a project; you report a percentage of your overall expended effort; presumably, when it comes to work hours, sky is the limit. There is an underlying assumption that all your effort goes into your job.

Remember Ken Cosgrove on Mad Men, who wrote science fiction? His boss Roger Sterling told him to knock it off, because the advertising job (where a client shot Cosgrove in the eye) provided everything a man could possibly need. If I remember correctly, the following night, Cosgrove wrote a sci-fi story about a robot who could only turn one knob on or off.

Not sure where I’m going with this.

Sometimes I get really grumpy about how little of myself I can show to the world, and how little the people with whom I interact get to know me and I them. It’s probably for the best, I know, for people usually consider me to be too much along every imaginable axis, but this making of myself small and palatable and partitioning of the self into bite-sized pieces is exhausting, saddening, enraging. I had a 15-min meeting with our (newish) department chair which took me two months to schedule, yet I could tell that she couldn’t wait for me to leave. She’s always been friendly and polite, but I’ve always had the feeling that whatever time we’re scheduled to spend together is too long.

So few of us really know each other. It would be nice to be known by someone other than kids and husband. But, if to be known is to always to be considered too much, then perhaps maybe not.

One could say that your colleagues are not your friends and I suppose that’s fine. But we spend decades working alongside one another, it’s almost a shame not to develop something resembling friendships, kind of like with neighbors — life thrusts you together, why not make the best of it? But most colleagues are focused on their work and family and don’t want to broach anything non-work related and don’t seem to (although, how would I even know?) have much going on outside family and work, except maybe church. Outside work, I’ve made some near-friendships in town, parents of my kids’ friends and folks in my sci-fi book club. It’s all great, but again, my foreignness (everyone else is local) and my general intensity freak everyone out. So I tone myself down, enforce quiet and passivity, and focus on absorbing. I think many people want to be heard, but don’t necessarily hear others. They want an audience, but never listen. Wanting people to consider you as a real multifaceted person, as someone who’s not just a minor character in their narrative, appears to always be an imposition.

Hi everyone! It’s time for my hopefully not-too-frequent plug for Academaze, a book of essays and cartoons on academic life at a research institution. It’s the best of the blog — originally Academic Jungle, then xykademiqz — between 2010 and 2016.

If you’ve bought and read Academaze, please go over to Amazon and leave a review. Reviews affect the Amazon algorithm and really help people find the book.

The reason I wrote Academaze is the same reason I blog: to share my experiences and, by doing so, perhaps to help some who need advice and to occasionally entertain. I have no expectations of getting wealthy off Academaze, but I’d love for Melanie Nelson of Annorlunda Books, who took a chance on this unusual project and who put a lot of time and money into making it a reality, to get a return on her investment and feel like it was ultimately worthwhile.

So, if you enjoy the blog, please consider buying Academaze — electronic or print (the print book is gorgeous, just sayin’) — and please leave a review if/once you’re done.

The book is really cool, I promise! Here’s a review blurb in APS CSWP & COM Gazette, and you can find others here.