I received some requests for reading recommendations, so here they are. The is basically my TBR (to be read) list, and is heavy on speculative fiction and horror. 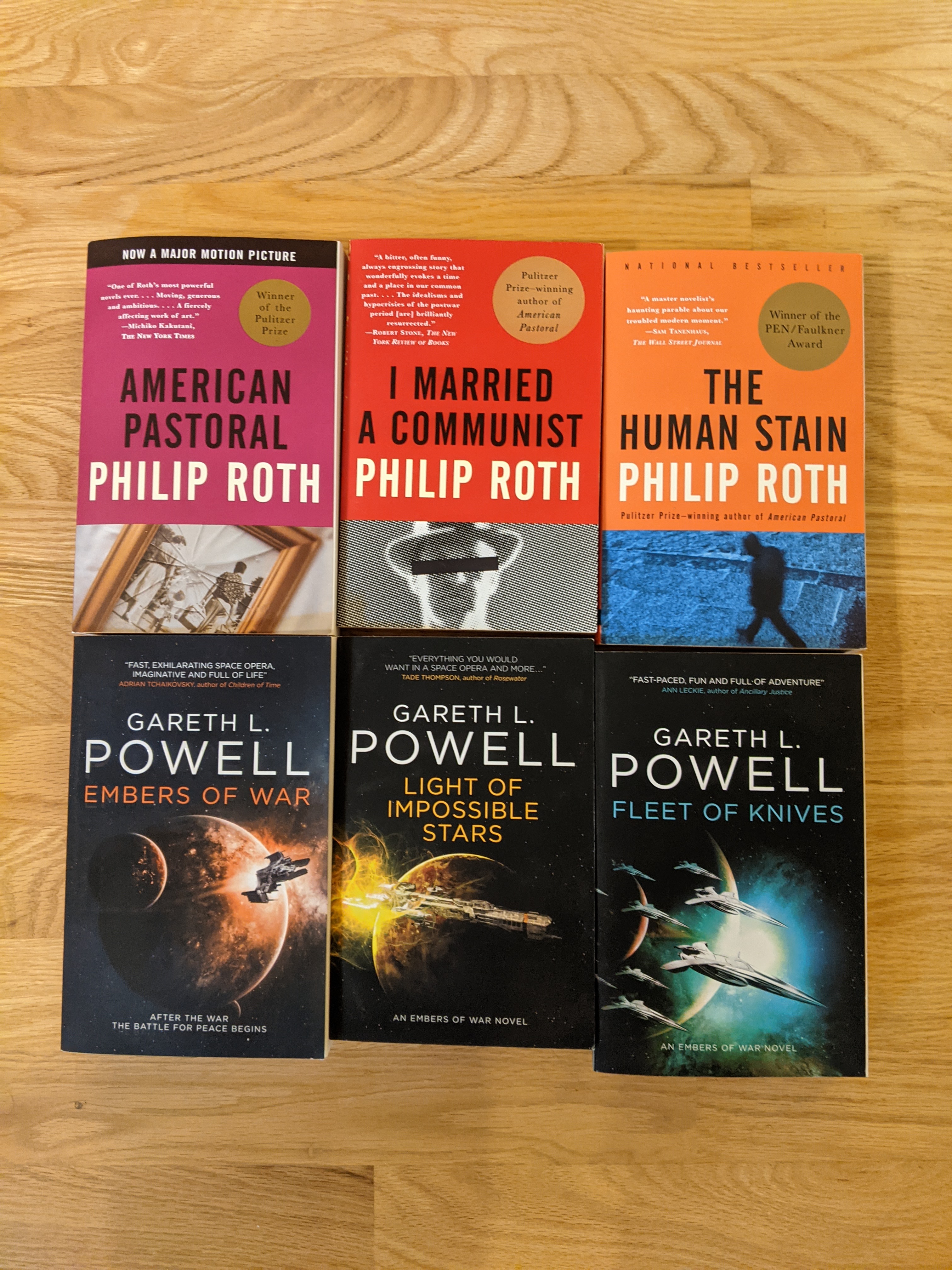 Philip Roth’s American Trilogy. I saw the movie The Human Stain, and the trilogy was highly recommended by some people whose literary tastes I trust, it’s considered a late 20th century classic, and I’m always interested in learning more about the US and understanding the forces that shape its culture.

Gareth L Powell’s Embers of War. I know nothing about it, except that it’s a space opera (hell yeah!) and it’s being made into a TV show, so I’m here for it.

In the first row here, we have three novels published by Angry Robot books: Ginger Smith’s The Rush’s Edge, R.W.W. Greene’s  The Light Years, and Chris J. Panatier’s The Phlebotomist. I know Rob Greene and Chris Panatier fairly well from Twitter, and they are excellent short-fiction writers, so I have reason to believe the books will be really good, and they each have two more novels coming out shortly, also with Angry Robot.

Andy Weir is the dude who gave us The Martian, and I hear from a number of people Project Hail Mary is just as good, and probably better. (Fun thing: DH and I independently bought this book, so now we have a spare, which we’ll probably donate to a Little Free Library.)

Octavia Butler’s Kindred. Octavia Butler is widely accepted as one of speculative fiction’s all-time greats, so it’s high time I read Kindred, which is likely her best known novel.

Dark Matter Magazine is a relatively new pro-paying speculative fiction magazine, and it rose to prominence with lightning speed. The stories within are great and the print magazine is just gorgeous, with plenty of full-color art on the cover and inside; each print issue sells like hotcakes. If you like print magazines, I highly recommend buying Dark Matter. Of course, there is also the electronic version in all popular formats.

Marie Vibbert (Galactic Hell Cats) is another writer I know from Twitter, and her short fiction is outstanding. She is the very cream of today’s crop for (hard) short sci-fi and she’s also very witty. I expect the novel to be a blast.

Taylor Jenkins Reid’s The Seven Husbands of Evelyn Hugo came up on Twitter in a thread on well-done novels with LGBTQ themes. Unlike most books on this list, Evelyn Hugo is supposed to be realistic (not speculative) fiction.

(have read) Hailey Piper is an excellent and extremely prolific writer of horror, and she tackles all lengths: flash, short stories, novellas, and novels. Benny Rose, the Cannibal King is a slasher-type novella I enjoyed, and she’s got a bunch of new books coming out. She also has plenty of free-to-read short fiction available on the web.

Eric Larocca’s Things Have Gotten Worse Since We Last Spoke  was recommended somewhere on Twitter, likely in a  horror thread. The gory, mesmerizing cover of this epistolary novella sealed the deal for me.

(have read) Aeryn Rudel’s Night Walk and Other Dark Paths is a collection of dark short fiction. Aeryn Rudel is an excellent  writer and the collection is really well done. Highly recommended.

What have you been reading, blogosphere?

I received some crappy grant news several weeks ago. The update that shook me most was a declination of a competitive renewal. During the post mortem with the program manager, I was told that one issue was that the  productivity hadn’t been “outstanding enough.” Mind you, on the three-year grant I had one major code release and nine peer-reviewed papers.

What really grates my cheese is that one full year of the three-year period was the fucking pandemic. After all the hand-wringing and expressions of sympathy and understanding from various institutions, including the funding agencies, unsurprisingly, no one actually cares. Yes, please, drop the female PI with two school-aged kids who  spent the last 15 months sitting next to one of her kids in the shared office. Who got interrupted a million times each workday during virtual school. Who was expected to extend endless leniency to her graduate students as they battled fear, low motivation, and flare-ups of chronic mental health issues due to the pandemic.

The worst thing is I don’t know if the given reason is real. Maybe I was slated for the hatchet no matter what, likely because (I suspect) a retirement might be happening, but it’s easier to say it’s my fault. Or if it was really my fault, and I should have somehow done more, somehow squeezed out more from myself because I am apparently the only one who’s not supposed to be cut any slack, and can thus be squeezed further. I have to show not just good productivity, but outstanding productivity, even though 1/3 of the grant was during the global pandemic, and screw me for having  been affected by it like the loser that I am.

More than anything, I feel deeply ashamed for being a failure. Every time I get a grant rejection I feel like a worthless piece of incompetent shit, and this rejection just slayed me. Of course, I need to keep my chin up and stay cool in front of my group, and this also isn’t something to be shared with colleagues (as one put it the first and only time I brought up grant rejections with him, this is loser talk).

If you’re wondering what I am doing this summer, and this fall, and forever, it’s writing grants. I will always, always write grants, and will get most of them rejected, and will then write more grants, and it doesn’t matter that it doesn’t leave much time to actually do the work that gets funded, as long as I write, endlessly write, until I drop dead or retire,  whatever comes first. (Death. Death will come first.)