I had great plans for this week. I was finally going to take a week off work, sleep in (younger kids’ last week at camp) and take daily walks, take care of some long-standing errands, and recuperate after an exhausting summer, in order to be refreshed before going into what promises to be a very busy school year.

How silly of me to make plans! I came back from a trip Friday night to a feverish Smurf. He’s still ill with what appears to be a benign but highly uncomfortable primary infection with the virus that is exceedingly common and gives people cold sores. He’s feverish and has mouth sores, so he hasn’t eaten much in four days. So I have spent the last 4 days and likely will the next week or so (these mouth sores take 7-14 days to heal, poor baby) with a whimpering Smurf lying across me, both of us watching movies pretty much all day. Do not ask how many times I have seen Kung Fu Panda 3 (which is pretty great, btw, on par with the first one; I don’t even remember the second one). Also, all Lego short movies on Netflix are hilarious. I recommend Lego Ninjago and Lego Marvel Super Heroes (gotta love the angsty Spiderman).

I also got sick after the mad push to a deadline along with travel last week, so all the cartoon watching with an adorable albeit sick Smurf has been a really welcome forced vacation. Even if I wanted to cheat on myself and my vacation plans (which, let’s face it, I totally would, because the new-semester barrage of emails has already started), now I can’t, and I am actually somewhat relaxed. Since Smurf and I are at home, Middle Boy invents reasons to stay home from camp, too… So basically we are all home (except DH), which is nice. Smurf and I are semi-quarantined, which means no touching the rest of the family and I wash hands like crazy when I invariably have to do stuff for the kids.

But, onto nicer things! I have been wanting to post about some fun pop culture for a while, and finally I have a bit of time! 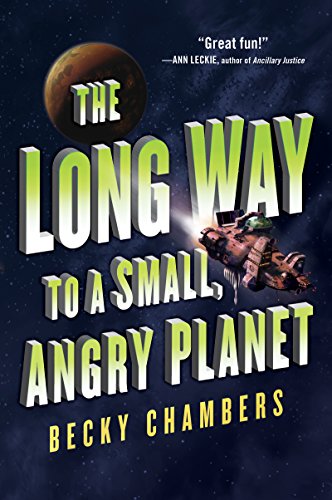 The Long Way to a Small, Angry Planet, by Becky Chambers. Oh, how I enjoyed this book! It was a page-turner and left me with such a lovely high after I was done! I cannot wait for another adventure in the same universe (coming this fall — squeee!) It was really nicely written, very unassuming, fluid, clear. The beauty of the writing reminded me of another favorite, The First Fifteen Lives of Harry August… Whose author Claire North, incidentally, wrote a blurb that IMHO perfectly encapsulates the book:

Then I picked up an oldie, The Dispossessed, by Ursula Le Guin. I have read some of her books in my native tongue, but this was the first novel of hers that I have read in English. While I have always enjoyed her writing, I admit that I was surprised to see some spots where the turn of phrase was really jarring. Anyway, this was a beautiful story about belonging, what it means to be at home, and what it is that one really needs to be fulfilled. The book, published in 1974, is also (and some would say primarily) a political study of anarchism (akin to libertarian socialism) versus capitalism on sister planets Anarres and Urras, how any political system is open to abuse and corruption, and what it means to be really free. This book belongs to the Hainish Cycle.  (The book’s Wiki page is quite exhaustive.)

I am also disappointed in my nerdy brethren because they have been giving perfectly good movies bad rep all summer long. I am here to tell you to go see the blockbusters; they are meant to be fun and they do deliver, and they do it better than most summer offerings. Enjoy them and don’t believe all the negative reviews.

Warcraft. I don’t play the game. I live with a diehard World of Warcraft player (DH) and a son who occasionally plays. I also don’t particularly care for fantasy as a genre and I didn’t know the story behind WoW (a.k.a. “the lore”). But now I sort of do. As a standalone movie it was well done. The Orcs were great, the story was compelling, the movie was not too long (I will never get back all the many, many hours wasted on freakin’ Hobbit; it takes longer to see all the movies  than it does to read the goddamn 330-page book). But Warcraft is good, visually pleasing, and fun, and what makes it even better in my mind is that it doesn’t take itself too seriously.

Star Trek Beyond. I loved it! I loved it about as much as I loved the first one in the new series,  Star Trek (2009), which is a lot. I am willing to go see it again. An awesome new space station, new alien species, fun banter between Scotty and an important alien female character (although annoying that Scotty keeps calling her “lassie”), also exchanges between Doc McCoy and Spock, excellent employment of Beastie Boys’ “Sabotage” and the associated joke, Idris Elba as the villain– what’s not to like?

Ghostbusters. It’s pretty funny! Not the funniest thing I have seen in ages, and a few parts drag on (Melissa McCarthy and Kristen Wiig are serious-ish characters and have been underutilized, IMHO), and the villain is not particularly cool. But Kate McKinnon as the crazy gadget nerd is absolutely hilarious, as is Chris Hemsworth as dumber-than-a-rock eye-candy receptionist. Leslie Jones has some of the absolutely best lines in the whole movie. And all of the old Ghostbusters make cameos, which was really cool.

Batman vs Superman: Dawn of Justice. There is nothing wrong with this movie. Perhaps surprisingly, Ben Affleck is actually an excellent choice for Batman in this context. I read all the awful reviews and I have no idea what it is that they saw. Watch it, the movie is cool. I am also looking forward to seeing Suicide Squad and later Superwoman, as I think DC movies have been undeservedly getting bad press.

Among the TV shows, DH and I are enjoying Killjoys and Dark Matter and looking forward to the return of The Expanse and Orphan Black.

Also, among Earth-bound shows, we enjoy Suits, and I would like to enjoy Stranger Things (it’s really cool) if I weren’t so much of a wimp, because it’s really scary so I can’t sleep.

Dearest, geekiest blogosphere, which books, movies, or shows have you been enjoying this summer?